75 years ago today the United Nations came into existence. The world was emerging from years of bitter warfare, which had also witnessed systematic genocide and cruelty. There were immediate issues about rebuilding the broken world, and establishing peace; there were longer term issues of ensuring that the ‘human rights’ of everyone on the planet were acknowledged and respected; there was a need to address ‘development’ issues of poverty, access to education etc; and in later years it has become the forum for all nations to address global issues like climate change. So alongside the main ‘political body’ designed to resolve conflict without fighting, were a number of agencies like Unesco and  Unicef. How has it fared: has it lived up to its expectations; what would the world have been like without it? There have been many wars, with millions killed, over the last 75 years; the Great Powers still posture and prevaricate in their own interest; there have been cases of proven or assumed corruption. There are politicians who are happy to criticise it, and to challenge the Universal Declaration of Human Rights. However, if the UN had not existed, what would the world be like? Probably much, much worse. It is not a ‘world government’ – it can only operate if it can raise consensus or create a large enough body of support among its members. It does much ‘good work’ unseen and unnoticed. Here’s to the next 75 years

Lord, there are so many issues that need to be addressed to make this the kind of world you want – from respect for human rights, to peaceful resolution of conflict, to addressing poverty and all that goes with it, to tackling the climate emergency. We give thanks for the work of the United Nations and its staff. We pray for its continued work, and that issues that give excuses for criticising it will be addressed

PS After today we travel from Inversnaid to Stronachdlachar, and explore Loch Katrine 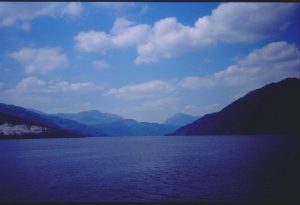