My family lived for a few years in a large city in a North African country. There were 2 local Christians, a handful on our team, a small number of students from French speaking countries like Cameroon, another handful of French women who had married local Muslim men or were working in the area. We all gathered for worship with our friends, colleagues, compatriots or secretly with local people who were on a journey of faith with Jesus but every Saturday night we met altogether in the flat of an elderly Catholic priest who had converted his living room into a chapel. He let the students stay in his spare rooms, he let us pray in our own languages, we shared the Eucharist together regardless of denomination and we often ended up working together in the field doing development work with the poorest people we had all ever met. We were a massive minority who chose to focus in on what we had in common rather than our many differences. It is a lesson that has stuck with me and one that we try to make a reality in Dumbarton through praying together in Awake Dumbarton and through sharing each other’s thoughts on special occasions like this. In some small way we help keep the light shining in the darkness. 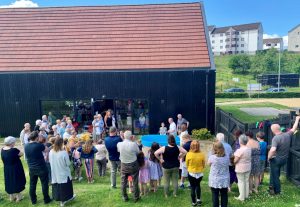