There are stories in the news of people being arrested at anti-government/ ‘release Navalny’ protests in Russia, and of the arrest of government leaders and others in Myanmar (formerly Burma). They are not isolated incidents, but reflect a pattern found in many countries – and in some cases people are simply arrested and imprisoned without any charges or trial. Prosecutors in those countries will say that people broke laws, but others will dispute whether those laws are fair and just (let alone the legal process). There are a number of people in the Bible who faced imprisonment for political reasons or were treated unfairly by the legal system – names like Moses, Samson, Jeremiah, Daniel, John the Baptist, Jesus, Peter and Paul spring to mind.

Many of us are struggling to cope with lockdown restrictions. We can’t have people to visit, we can’t visit them. We can’t go for a trip to the seaside, or a shopping centre,or the hills. We can’t go out for a coffee or lunch. We are trying hard to cope, but it is very difficult. At least we can go outside, we have the freedom to move around in our house/flat, we don’t have people watching our every movement. How would we feel if we were in the position of a Moses or a Daniel, a Peter or a Paul? From our own experience of frustration and resentment against being in ‘lockdown’ maybe we can give some thought to those arrested and confined, with no freedoms and no privacy

Lord, we are struggling to cope with the restrictions of lockdown. We remember those who have been arrested for all sorts of political reasons, who face unfair trials, or no trials. We pray for freedom for them and the righting of wrongs

On 18 May 1787 Robert Burns and Robert Ainslie visited Berwick, which he described as an ‘idle town but rudely picturesque’. Lord Errol showed him round the walls, he dined with a merchant called Mr Clunzie, but did not stay over 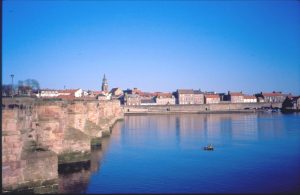