I remember a conversation some years ago with a friend, who is a well-qualified biologist, about the preponderance of drakes rather than ducks on a pond or river. Her answer was along the lines of: the females tend to stay in the background, while the males put on a lot of show. Maybe that is a behaviour not confined to aquatic birds on rivers and ponds, but found among many species, including humanity. None of us would be here without women. Women play a huge part in humanity’s day-to-day living – but in many places they are very much in the background.  It isn’t  a matter of deliberate choice – in many cultures and communities women are assigned a minor role, associated with home-keeping, sometimes bolstered by arguments based on religious beliefs or spurious science. In other places men have begun to recognise that if women are given the opportunity to develop their potential to the full, then society as a whole benefits. Big strides have been made in many places to improve education, career opportunities and safety for women, but there is still much to do. The Christian faith has been as misogynistic as any, and yet at the core of its story it was a woman who bore Jesus and gave him his humanity, and it was a woman who first encountered the Risen Jesus. Maybe we have still to embrace fully what seems to have been a very early part of the church’s liturgy – perhaps associated with baptism – that in Christ ‘there is ..neither male nor female.. but all are one in him’?

Lord, thank you for the contributions that women have made in our lives – whether family, teachers, youth leaders, bosses, people like Marie Curie at the forefront of research, or whatever. We acknowledge that over time women have been treated as ‘second-class’ by most men, and in many places still are today. Thank you for the steps already taken to allow women to achieve their full potential. Inspire us all to take further steps to ensure that everyone, of whatever background, whatever gender, can live in safety and achieve their full potential, and make the fullest contribution to the good of all

On Wednesday 30 May Burns’ party ‘left Newcastle early in the morning’ and travelled to Hexham for breakfast, before continuing to Wardrew Spa, just over the Cumberland border to stay the night. Within Hexham Abbey church are remains of the 7th century cathedral, described by one contemporary writer as having no peer ‘this side of the Alps’ 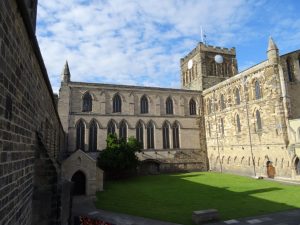