This weekend marks the 80th anniversary of the Clydebank Blitz, which also affected neighbouring towns like Dumbarton. As the years go by, there are fewer and fewer people who were present when the devastation was wrought upon the town. In due course it was rebuilt – but was the rebuilt town the same as the old one? How long did people carry the scars (mental and physical) from those raids? What was lost, that could not be replaced? As we remember those killed, injured, made homeless or traumatised in that attack, maybe we can also remember people today, in places like Syria, Yemen and Lebanon, who are going through similar experiences

Lord, we remember the devastation wrought on the people of Clydebank and neighbouring towns 80 years ago, and the long-term impact on their physical and mental health. We remember everyone in other towns and districts who suffered similar experiences during the First and Second World Wars, and subsequent conflicts. We also remember people experiencing war, destruction and being made homeless today. Help us to work for peace, reconciliation and renewal

Warden lies to the West of Hexham. The tower dates to the 10th or 11th centuries. The cross in front of the tower is from the 7th century 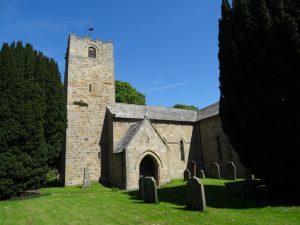