Various parts of the media, thinking of the Duke of Edinburgh’s funeral this afternoon, comment on the Queen having to sit alone, there being no singing at the funeral and all those attending having to wear facemasks and sit 2m apart. Sadly those are arrangements that many people have experienced over the last year – and in some cases the maximum number of mourners allowed at the funeral was as low as 6 or 8 (and in some local authority areas fewer). Many have commented on missing being able to hug/ shake hands, being able to gather with family and friends afterwards to share stories and memories. Some have however remarked that they found the smaller funeral less ‘intimidating’ than facing a large crowd, and they appreciated not having to face the ordeal of shaking hands with everyone. Over the year many who have not been able to attend a friend or neighbour’s funeral have stood silently at the kerb as the cortege went past. Some have done it as any cortege passed – whether they knew the deceased or not, expressing silently the wider community’s support for the mourners. It has been announced that the maximum number able to attend a funeral will soon go up to 50 – but in practice, while the 2m distancing rule is in place, many crematoria, parlours and places of worship will not be able to accommodate that number. As we seek to rebuild life as restrictions are eased, let’s not forget those who have been bereaved, and let’s see how as a community we can better support each other in the future

Lord, death is part of life, it is a mystery, and it hurts us deeply when someone we know and love passes from this life. Be with all who are grieving. Help us as individuals and as communities to offer them care and support

PS After Culloden, and help from many Highlanders including Flora MacDonald, Charles Edward Stuart escaped to France. The French government rather lost faith in him, and he settled in Italy. The rest of his life (he died in 1788) was largely broken relationships and alcoholism. He left no legitimate heir, and when his brother, Henry Cardinal Duke of York died in 1807 the legitimate direct line of the Stuarts died out. The last Stuarts were buried in St Peter’s Basilica. The attached photo shows the monument erected over their tomb 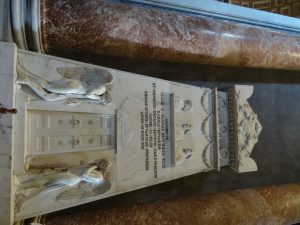