The second Monday in February is International Epilepsy Day, which is marked in 130 countries to acknowledge and highlight the problems faced by people living with it, their families and carers. According to the WHO over 50m people worldwide are living with epilepsy. What is it? A sudden intense burst of electrical activity in the brain causes regular brain messages to become mixed up, and the person takes a ‘seizure’. The impact on behaviour depends on where in the brain this happens. There are different types of epilepsy: some start at an early age, others later in life; some are associated with known damage to the brain, but in the majority of cases there is no known cause; in some cases there are recurrent seizures, in others they can be isolated incidents. In most cases the condition is controlled by medication. More information is available at https://internationalepilepsyday.org/ or on the websites of the NHS or UK epilepsy charities

Lord, there are probably people that we know who have, or have had, epilepsy. Most of us don’t appreciate what the impact can be on someone’s life, or the lives of their family and carers. We know too that in the past there has been stigma associated with the condition – and many of us would be unsure what to do if we encountered someone having a seizure. Be with those living with the condition, and assure them that they are not alone, they have support, and there is no stigma attached to it. Help us to be more aware of it, and responsive to it

Sunday 27 May 1787 Robert Burns and friends travelled by horse from Coldstream to Alnwick and stayed there, describing the castle as ‘furnished in a most princely manner’ 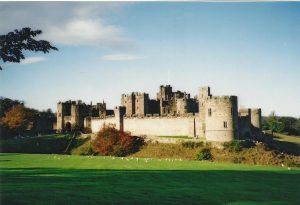