Parkinson’s Disease is reckoned to affect about 145,000 people in Britain. It is a neurological condition: as it develops, cells in the brain stop working properly and are lost over time. Symptoms start to appear when the brain cannot produce enough of a chemical called dopamine to control movement properly. The three main symptoms are tremor (shaking), slowness of movement and rigidity (muscle stiffness). There isn’t currently a cure, though researchers are looking to see if they can find one. However there are different treatments, therapies and support available for those with the disease and their carers. Further information can be found on the NHS website and https://www.parkinsons.org.uk/

Lord, thank you for the work being done to research treatments and maybe an eventual cure for Parkinson’s Disease. We ask for your blessing on all those living with the Disease and their carers. Help us to be more aware of it, and how we can give support

Friday marks the 275th anniversary of the Battle of Culloden, so for the rest of the week we’ll have some photos (most old and a bit grainy) linked to the Jacobite Risings. Today’s is the Soldier’s Leap at Killiecrankie 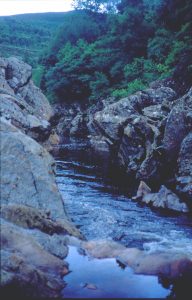